Every part of the costume is made by hand, from the weaving to the ornamentation such as embroidery, crocheting and even metal clasps on the bodice or vest. The style, colours, patterns and designs vary by province or region in Lithuania and costumes distinctly represent each region. However, they all have the same elements as shown below. (Note that children’s and young girls’ costumes had the same elements but are usually more simplified.)

After World War II, styles and patterns of the costume made in the diaspora began to consolidate somewhat as access to better materials and yarns became available and people from various Lithuanian regions settled together and married. Therefore, it was not uncommon to see elements of two or more regions represented in a single costume. The styles also reflected a freer and more modern approach to colour and pattern, but the costumes continued to be woven and sewn by hand, a testament to the artistry and traditions carried forward to North America.

This section is a very brief description of costume design and construction. For more detail we refer you to the definitive source of information as assembled in the book Lithuanian National Costume by LTFAI’s founders Antanas and Anastazija Tamosaitis, published by the Lithuanian Folk Art Institute. 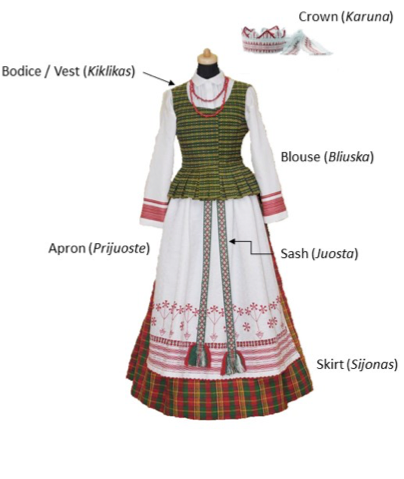 Overall a general scheme is maintained for a single costume with patterns and colours in repetition.  Red, blue and green major colours are more traditional although purple and gold are popular in the diaspora as well.  Patterns are generally small with larger patterns shown on the aprons.  For each costume, the patterns and colour scheme are cohesive across all elements. Ornamentation is generally symmetrical and includes various geometric and stylized motifs from nature such as flowers, sun, stars etc.

Blouses or shirts were originally tunics with shoulder tabs and reached down to the knees. However, this style is not very comfortable so a more modern cut was adopted. The sleeves remained wide and are usually sewed selvage to selvage (ie the complete width of the fabric woven on a 27 inch loom). The top of the sleeve is shaped and gathered as a modern shirt. Traditionally woven from linen but now more often cotton and cotton/linen blend is used. In some cases, only the decorative parts are hand-woven – the body of the shirt is bought material.

Ornamentation can vary widely. In general, patterns are either woven or embroidered on the front, collar, sleeves and cuffs. Some blouses have extensive incorporated patterns, while others only have them in one area, such as the cuffs. Colours tend to be of one colour family (i.e., dark blue and light blue) with patterns in white thread as well.

Although the blouse is very loose-fitting, the cuffs are usually fitted and closed with buttons, hooks or clasps, as is the collar.

The design of the bodice varies greatly, depending on the region the costume represents. The same warp may be used for the skirt, the vest and the apron. The bodices are lined and are form-fitting. The lining is either in the background colour or in a complementary colour and is of a lightweight material.

The cut can vary greatly with the cut of the neck being square, oval or v-shaped. The bodices are generally not too long but are generally pleated in either an overlapping square or diamond shape. The closures vary from a simple hook and eye to a variety of metal clasps, buttons or toggles.

The skirt usually has a woollen ground, though there are some linen skirts. The skirt may have 4-inch pleats or be gathered. Some skirts have fewer pleats or gathers in the front under the apron. Occasionally a narrow 1-inch sash is sewn to the bottom of the skirt on the inside to protect the fabric from excessive wear and tear.

If the stripes and ornamentation are vertical, the fabric is woven in one panel, the length of which is the required width. If the stripes are horizontal, the fabric is woven in three to five panels, making sure that the disposition of the design is the same on all the panels. The waistband is either a plain or patterned weave sewn into the skirt. Closure is either by hook and eye or button.

The apron is usually woven as a rectangle of either linen or wool depending on the region represented. The apron may have several pleats or, more likely, is gathered. Colours are complementary to the overall costume, but the patterns may vary, and can be small or large, vertical or horizontal. A plain band (generally not woven) is usually sewn into the apron at the top with a longer ribbon to tie on at the back.

The patterns can be either woven or embroidered. The bottom can be plainly finished or embellished with fringes of varying lengths and colours. Usually the fringe is a single complementary colour but can be multi-coloured.

The crown is either woven on the same warp as the vest or is formed from a sash. The ribands are woven in the same manner as the blouse.

The crown always consists of several points around the entire circumference and has 2 woven ribands attached at the back. These can be attached simply or pleated or looped. The riband width varies from 3 to 5 inches and is generally delicately fringed along the sides and bottom. The points of the crown can be simple or have additional crocheting on the top. The length varies but is meant to reach the middle of a person’s back.

The sash is an additional piece that is usually woven separately (in a variety of ways) using wool, linen and/or cotton threads. It will complement the costume in colour and pattern but is usually separately sourced.  Sashes are used for a variety of purposes but are usually part of a costume worn at the waist on top of the bodice or sometimes below.