What is Lithuanian Folk Art?

Lithuanian folk art is one of the oldest expressions of Lithuanian culture, as is proved by a variety of archeological artifacts. Over the course of time, the tree of Lithuanian culture branched out in three main directions: language, folklore and song, as well as folk art. The latter was influenced by the environment, the climate, various locations and resources, and also customs, which determined the purpose of the object, its form, its unique coloration and variation of pattern.

In the mid-nineteenth century, many European nations began to research the crafts made by their homesteaders and collect them in museums. Other countries took an interest in our folk-craft as well, as there were no Lithuanian experts in this field at the time. As a result, specimens of  Lithuanian folk art, especially weavings, were found in the museums of its neighbouring countries. Historical sources describing our folk costume are both sparse and imprecise. The most reliable basis for research are archeological artifacts, old etchings and best of all, actual samples – from the dowry chests of our ancestors, which I collected, drew, photographed and documented over the years. The widest selection of hand-woven clothing was found in Žemaitija (the Lowlands of Lithuania), and some in Aukštaitija (the Highlands).

Until the beginning of the 19th century, Lithuania was mostly agricultural – 85% of the population lived on homesteads (farms) or small towns. For this reason, the homesteaders followed the traditions of their forefathers and fashioned their tools and themselves.

In his introduction to the book Lietuvių tautodailės institutas išeivijoje (The Lithuanian Folk Art Institute in the Diaspora, published in Lithuanian), Antanas Tamošaitis also speaks of buildings and tools that the Lithuanians fashioned by hand in distinctive styles. Chapels (in cemeteries and larger homesteads), wooden wayside crosses, farmhouses, furniture, spinning wheels, distaffs, towel racks, shelving units, spoons and other wooden cups and utensils as well as pottery. Other Lithuanian crafts are coloured Easter eggs, straw decorations (šiaudinukai), papercut art, wickerwork, and metalwork ornamentation, crosses and church spires. “Vilniaus verbos” are a unique ornate decoration made of dried flowers and grasses tied and woven together in patterns around a central stalk. 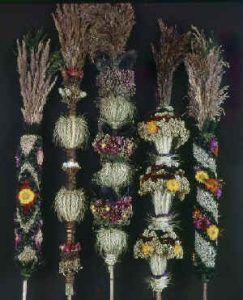 Every household had a hand-loom made by local carpenters, on which the females of the family were expected to weave all the necessary linens and clothing for their family, including their own wedding attire and distinctive sashes.

Folk art was the expression of the homesteader’s soul and his most precious treasure, wrote Tamošaitis. He was very proud of the artistic level of our folk art, and his goal in life, as well as the mission of the Lithuanian Folk Art Institute, was and is to collect, study and preserve ancient folk art as well as to create and foster new folk art.

Lithuanian folk art is traditionally classified in the following categories, although not all of them are practiced in the diaspora. 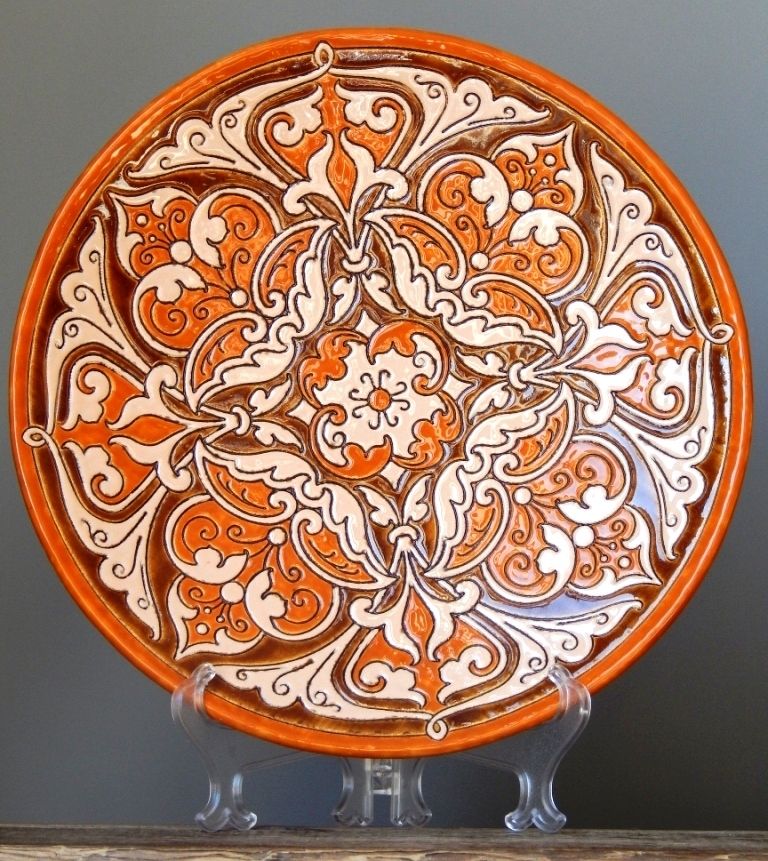 Village potters had small workshops and provided the peasants with the necessary jugs, pots, plates, candleholders, vases, and figurines.   Each potter developed his own characteristic style and made his own glazes. Ceramics were produced in two ways: 1) the pattern was applied to the greenware upon removal from the wheel, or 2) after firing, the pattern was painted on the pottery and then re-fired. 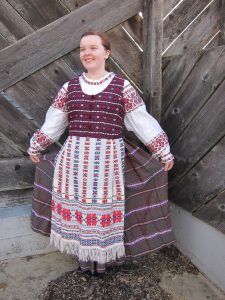 The national costumes were known for the beauty of their colours, variety of patterns, and distinctive style.  Until the twentieth century, a Lithuanian girl would weave her own wedding dress and costumes for festive occasions, as well as work clothes.  The weaving technique, patterns, colours, and cut of national costumes are categorized according to seven regions of Lithuania: Aukštaitija, the Vilnius region, Dzūkija, Zanavykija, Mažoji Lietuva (Lithuania Minor), and Žemaitija (Samogitia).

A useful article for anyone who has a national costume: Preserving a Treasure: Care and Maintenance of the Lithuanian National Costume (K.D. Pavilanytė-Gaputienė) 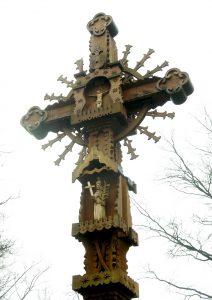 Lithuania is known as the Land of Crosses, and is famous for the Hill of Crosses near Šiauliai.  The countryside is dotted with many ornamental wooden crosses and miniature chapel-posts or shrines erected at crossroads, in front of homesteads, and in cemeteries.  They vary widely in style and ornamentation, and are an art form in themselves. There is a specific word for the folk artist who makes crosses: “kryždirbys”. The carving of crosses (cross-crafting) was recognized as  a UNESCO Immaterial World Heritage art as of 2001.

The famous Hill of Crosses, a pilgrimage site for several hundred years, is a testament to Lithuanian faith and perseverance. During Soviet rule, the crosses were destroyed with bulldozers more than once, and locals would rebuild them almost overnight. There are over 200,000 crosses on the Hill. 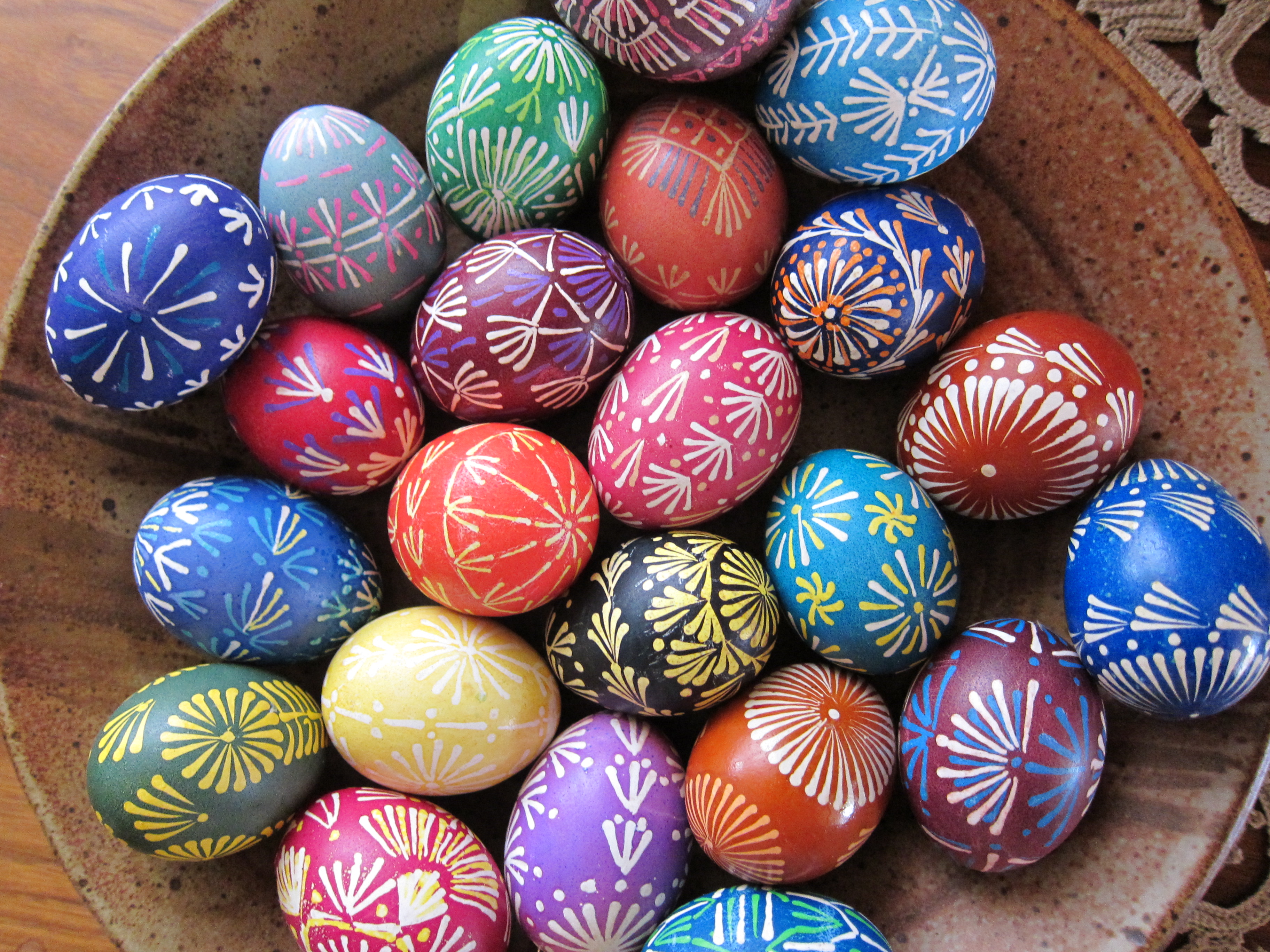 The colouring of Easter eggs with natural dyes was a very popular tradition among the peasants.  Either a pattern was applied to the egg with wax before dyeing, or else the whole egg was dyed first and patterns were made by scratching away the dye in certain areas with pointed tool.  The ornamented eggs were used as decorations for the festive Easter table and as gifts.  The patterns used for eggs decorated with wax are distinct from the motifs and composition used for the scratch technique. 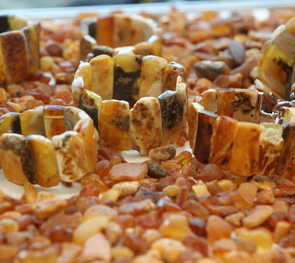 Amber has been used for adornment since Neolithic times. Lithuanians have always loved this semi-precious stone, Baltic Gold, and endow it with healing and magical power to this day.

Everything you want to know about amber is in the beautifully illustrated volume, Amber, published in Lithuania in 2015 by the Vilnius Academy of Arts Press (in English).

Iron crosses and church spires another iconic art form, and are often used to decorate cemeteries, monuments and memorials. Many of their motifs hark back to pagan times. Blacksmiths also forged tools and other farm and household items. 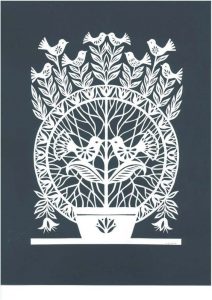 In Lithuania, paper cutting has been practiced as an art since the 16th century (some sources say – the 14th) and was especially popular for decorations at weddings and other special events. By the end of the 19th century, it was widely used as decoration for the home – to cover a window, trim a shelf, a lamp or a mirror frame.

The art of straw ornamentation is a folk art brought from Lithuania by post WW II emigres. As in the area of weaving art, Antanas and Anastazija Tamošaitis were instrumental in promoting and preserving this craft, and Antanas had prepared the material for a book on this subject in 1988-1989, “Lithuanian Straw Art”. It was never published, however, the Lithuanian Folk Art Institute is pleased to present excerpts from the manuscript here, exclusively on this website. 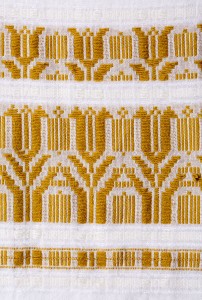 Until the 20th century there were no textile mills in Lithuania. Peasants would spin linen and wool, and weave all their own cloth to make their garments, bedspreads, bed sheets, towels, and tablecloths. Sashes were woven not only for use as belts, but also as gifts and special mementos. Each family had its own loom. The custom was that a bride would take to her new home at least two dowry chests of woven cloth for the future needs of her family.  These were her riches, and a matter of great pride. Lacework, knitting and crochet are still very popular, and the traditional patterns often echo the motifs used in weaving. 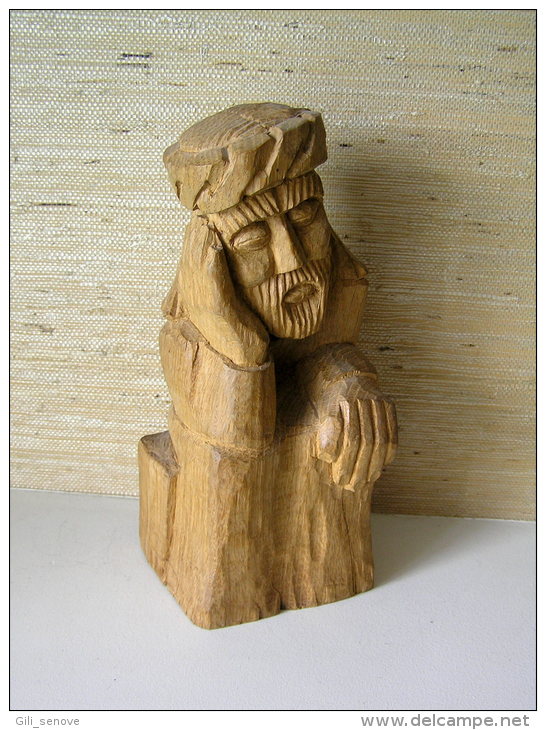 The seated figure of a pensive Christ, “Rūpintojelis”, became the symbol of Lithuanian folk art sculpture. Carvers also made various musical instruments out of wood, especially “kanklės”, a type of zither.

Paintings were mostly of saints, painted in oils on wood by amateur craftsmen.  Woodcutters also engraved pictures on wooden blocks (woodcuts), coloured them, and made prints.