The symbolism of the Easter egg was known and recorded by the Egyptians, Greeks, Persians, Chinese and other highly developed cultures. When eggs were dyed, additional power and meaning was ascribed to the colour. According to some sources, the Easter egg could predict the wheat, fruit or honey harvest and avert misfortune.

The myth of the Easter egg has been closely linked to the social and religious life of Lithuanian peasants – tillers of the soil and worshippers of nature. The coloured eggs were made especially for Easter and St. George’s Day (April 23rd).

The most important aspect of the Easter egg for the Lithuanian cultural tradition was its artistic features: the variety and layering of tone, ingenuity and composition of pattern, and the use of ancient symbolism.

In his seminal book Lithuanian Easter Eggs, Antanas Tamošaitis published his vast collection of illustrations, begun in 1928, as well as background information on traditions and techniques.

In ancient times, before the advent of Christianity, many ethnic groups held elaborate festivals commemorating the Spring Rite. In Lithuania, Easter was the most important and widely celebrated festival of the year. During the week before Easter, Tamošaitis writes, preparations for egg-dyeing included gathering natural dyes such as oak or alder bark, sprigs of budding birch, other twigs and mosses. Throughout Lent, housewives collected onion skins, apple peelings, nutshells, herbs and dried flowers for boiling as a dye. Vinegar or alum was used to strengthen the colours. The eggs were either boiled with the dye or the dye was applied to them after boiling, in one or several colour-baths.

Some eggs were left white, for the application of patterns, others were dyed for scratch-patterning. After drying a dyed egg, a pen-knife or shard of glass was used to create a scratch pattern.

The scratch technique bears similarities to Lithuanian bronze and silver artifacts dating back to the 11-15th centuries. The linear strokes are also repeated in the carved wooden distaffs of the 18-19th centuries. 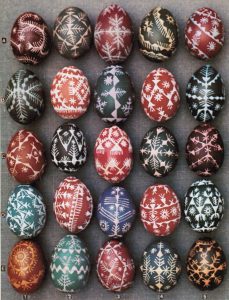 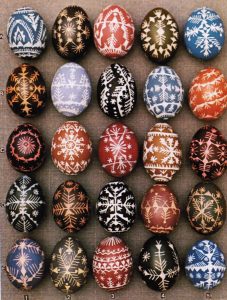 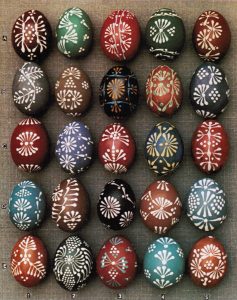 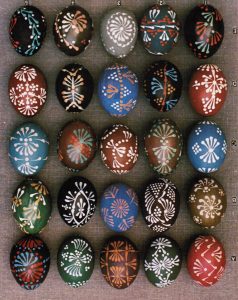 The wax pattern technique, called the batik method for fabric-dyeing, is used in many countries. For wax-patterned Easter eggs, Lithuanians used a drawing pin, a small nail, fishbone or shard of wood. Beeswax is best for tracing patterns because of its low melting-point, although tallow is also used. A pin is embedded in the end of a small stick (or today, the eraser end of a pencil), and the head of the pin is dipped into the hot wax and immediately applied to the surface of the egg to form dots or strokes for a pattern.

The wax-patterned eggs are immersed in a dye-bath, then dried and heated gently in a hot towel to melt the wax, or the wax is lightly scraped away. To produce a multi-coloured egg, more wax is applied to dyed areas of the egg, which is then placed in another colour-bath, and so on. The wax is then removed to reveal the final pattern.

For more details, go to Resources/Instructions.